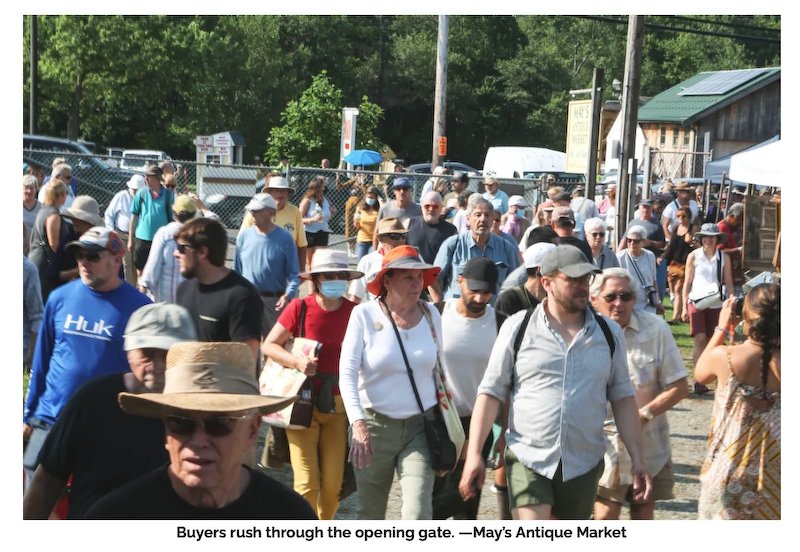 BRIMFIELD, MASS. – On some days a blazing inferno, on others a diluvial flood – that was the July 2021 reboot of the Brimfield Antiques Shows as the business got back into the swing of things following a 22-month hiatus. We dare call it hedonism as this antiquesfest divulged the pent-up desire of many folks who longed to touch the material and find something they never knew they needed. Things were same old – the wagons, the buyers and sellers, the smells, the friends, the weather – while some things were different: there was a brand new fashion show and a virtual show on Ruby Lane that carried over from the pandemic-era. One thing is for certain, it was good. Buying was good, selling was good and life up in Brimfield, Mass., for all intents and purposes, was right again.

“We waited so long for this, and we planned some very special events for this show. We want everyone to remember this show as the most fun one ever,” Klia Ververidis, the field’s co-owner said prior to the show. She had purchased the field with her husband Arthur Crissafuli just before the pandemic closed everything and was motived to create a different experience rather than just row after row of booths.

Ververidis had instituted several changes, most notably closing the gate to discourage early buying. However, well before the field was scheduled to open at noon Wednesday, the crowds that gathered had begun to block traffic, so she made the executive decision to open the field about 15 minutes early. She reported about 160 vendors filled about 200 spaces; some of them left at the end of Friday or early Saturday with a few die-hard exhibitors brazening out the rain that left several fields partially flooded. 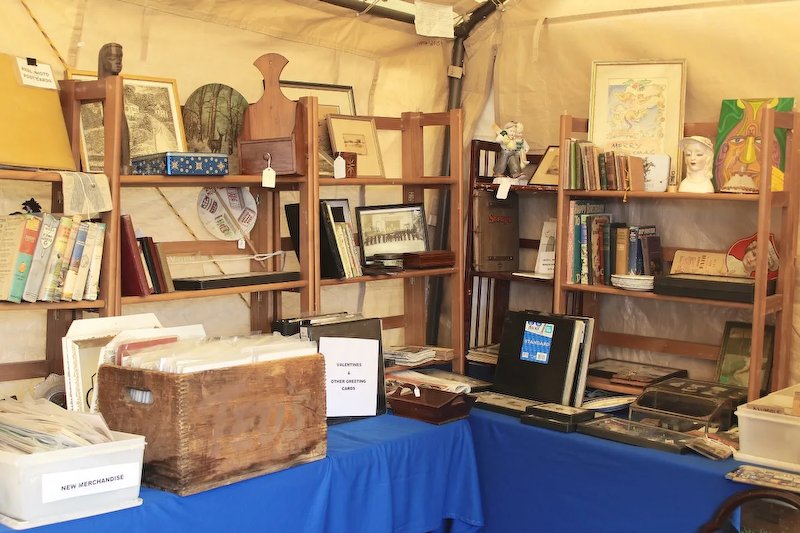 From Owl’s Head, Maine, Mainely Antiques & Paper specialized in, what else, ephemera from the Pine Tree State. —Hertan’s

“The attendance was outstanding. It was probably one of the most amazing shows I’ve ever had. I spoke to a lot of vendors; some of them told me they had their best show ever and some of the neighboring field owners said they’d never seen a larger crowd for opening,” Ververidis told Antiques and The Arts Weekly the day after the show closed. She said about 4,000 wristbands to the field were sold before 2 pm on Wednesday, at which point they stopped selling wristbands entirely. She said about 8,000 people came in the first day alone, with more than 20,000 coming through Sunday.

During the pandemic, Ververidis had partnered with Ruby Lane, the online vintage marketplace, which had allowed several vendors to sell online in a special short-term online show. Ruby Lane – now a sponsor of Hertan’s – continued to do this, creating a hybrid in-person/online show; Ververidis said she plans to continue this for future shows. After the event, Ruby Lane reported that 94 vendors had participated in the online version, with more than 36,000 visitors. 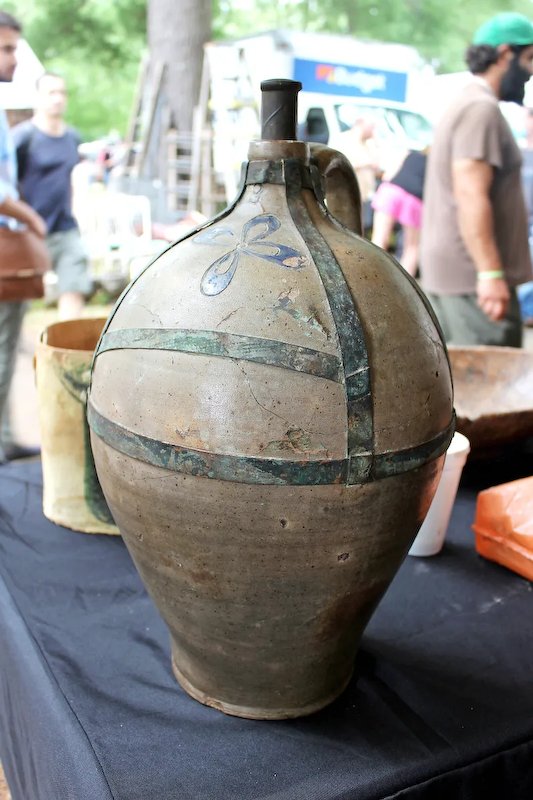 This circa 1800-10 3-gallon stoneware make-do jug, New York or New Jersey, with stylized cobalt floral decoration was with Sheffield, Mass., dealer Sam Herrup. What made it really special was the early metal strapwork that framed it. —Hertan’s

“That was an incredible event. We had space for 80 people to attend and we sold out,” Ververidis said. She plans to do it again in September.

“(We weren’t) sure what to expect with Hertans being gated but it worked,” Newcastle, Maine, dealers Tom Jewett and Butch Berdan commented, noting that they have not missed a Brimfield in more than 20 years. “(It) created a buzz and excitement when it opened like the old days, so we loved that. Klia and her crew couldn’t have been nicer and more accommodating; we really look forward to setting up with her as the new owner for years to come.”